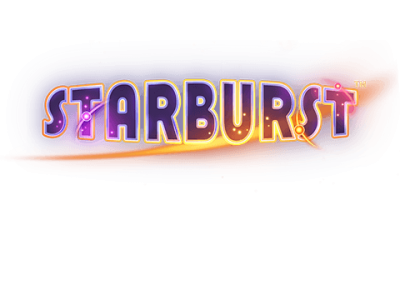 Starburst is one of Net Entertainment’s most alluring and exciting online slot games. The game is simple and easy to play.

With its visually enticing images, Starburst players encounter an array of precious gemstones along the way including diamonds, rubies and other glittering precious jewels.

The backdrop of royal purple adds an extra, sensual dimension to the visual landscape. Players who enjoy more intricate slot games with more free spins and bonuses may find this one a little simplistic for their taste, but anyone who likes a more basic slot game will find Starburst provides great entertainment value with a true immersive casino feel. 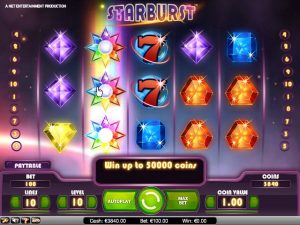 Starburst offers an expanding wild bonus feature – the only one in this particular game. Other exciting features include possible wins in in any direction with pay lines from both right to left and left to right.

Starburst’s wild symbol is a colorful star icon that appears on reels 2, 3 and 4. In can be substituted for any other symbol in the game and expands over the entire reel.

The Starburst feature concludes when no further new Starburst wilds appear on a re-spin. After a re-spin, up to two additional Starbursts can appear. This triggers one additional re-spin per Starburst wild appearance with a three re-spin maximum.

A wild star spreading over the entire wild triggers a wild re-spin round, holding in place the expanded wild reel. Other reels not featuring the expanding wild spin again. Players can win a a limit of three free spins total.

Being a non-progressive slot game, Starburst features a total of 2,500 coins, adding up to about £2,500, provided the player opts to bet the max. The jackpot is won when the player accumulates 5 gold bar icons on a single pay line. This equates to a 250x multiplied line bet on a £10 stake.

Starburst proves that simple can still be exciting by delivering a game that is visually engaging with interesting sound and visual elements. It delivers modern look and feel coupled with a quality traditional slot play experience. Some players, however, will find the lack of advanced features to be a bit of a drawback. There are no scatter symbols or multipliers, and there are no free spin rounds. The re-spin and expanding wild features, however, make up for the lack to an extent. This modern non-progressive jackpot slot machine game can cost as much as £100 to play on a max bet.

Net-Entertainment’s passion for creating simple, beautiful, functional online slot games is clear in Starburst. This 10 pay-line slot game is as pleasing to the eye as it is easy to play. Even though it may not have the usual slot game elements like the numerous features or games found in similar slot games, it is a great choice for the more casual gamer. If the lure of a £2,500 jackpot is enough to attract your interest, you are sure to enjoy playing Starburst – a simple, stylish, low-stakes slot game.