If any of you British blokes and birds have been playing online slots for a while, then you may already be familiar with the Jack Hammer title. A few years ago, a great new slots game was released, Jack Hammer vs. Evil Dr Wuten. This slot game picked up popularity incredibly quickly, and it becomes such a hot pick online that Net Entertainment decided to release a sequel, Jack Hammer 2. This is a way to carry the theme into a second game, continuing where the story left off. Not only a basic slot machine but Jack Hammer 2: Fishy Business is more like a graphic novel that you get to play along with. Players here enter into the world of the Dick Tracy-like private eye Jack Hammer, as he takes on his archenemy Don Crabby. There’s a damsel in distress, gun fights, sleuthing and plenty of clues and much more happening in Jack Hammer 2. And that’s just the theme! 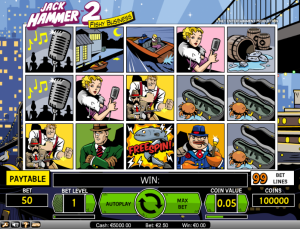 When you get into the game-play itself, there is a lot that scores some high points. There are 99 fixed pay lines, which means you’re going to be winning a lot. True, most wins are small wins and will only help you break even, but that’s a far cry from actually losing money! The idea is to keep you interested in the entire story, so you can truly have an interactive slots experience and play the Jack Hammer game while also playing slots, if that makes any sense.

Most players here claim to be hooked from the opening sequence. As soon as you load the game up, it plays an animated cut-scene that tells you what’s going on with Detective Hammer and his nemesis. You’ll also notice an animated backdrop here, much like an old-school comic book, and the reels include a lake house, the villain, Jack, microphones, damsels in distress, and much more.

Regarding betting, there are ten possible betting levels, from a coin value of 0.01 to 0.50. You can set this to an autoplay feature, or you can change your bets up every time. Or, if you’re lazy and just want to bet big and spin, you can select the max bet button and just hit it once and watch the wheel spin. This is why Jack Hammer 2: Fishy Business is a great choice for slots players of any budget. If you’re in the UK and are looking for a great slots game, this one might be right up your alley. Seeing as the game is basically brand new, it’s configured to operate on basically any sort of platform you have. Not only can you play it from classic PC and laptop options, but you can also take the game mobile via any device you have, and on any operating system you have. It works the same on iOS as it will work on Android, so you can always play this exciting slots game.

A slots game can have the coolest features and theme in the world, but unless you’re getting a bonus game along with free spins, most people will just keep on looking elsewhere. No worries here on this front; Jack Hammer 2 does offer you a bonus feature, including some extra spins that can potentially start adding a whole lot to the pot. The first extra feature you have with Jack Hammer 2 is the Sticky Wins feature. This is triggered when 3 or 4 scatter symbols are activated in a winning combination. The reels will continue spinning here, and all subsequent wins will be added to your total. And then there’s the classic free spins feature, which is launched when you collect 5 or more bonus symbols. This game can actually be re-triggered, which means you could end up with dozens of spins here.

The last extra game here would be the Wild Substitutions, which is triggered when a Wild icon shows up on a reel and subs for all symbols except the scatter. Like the previous games, this can also be re-triggered in the extra game, so you can theoretically keep playing game after game, so long as you’re lucky enough.