Immortal Romance is an exhilarating and enchanting online casino slot game that features a delightfully creepy cast of vampires and witches telling a devilish tale of forbidden love. It features its own original musical score and offers the player numerous bonus and free spin features.

Immortal Romance has an interesting and intriguing cast. The list of characters includes a Caribbean witch named Amber, a Transylvanian vampire named Troy, 800-year-old Michael (another vampire), and medical researcher Sarah whose devotion to Michael and eventual awakening to her true nature threatens to rain down calamity on her world.

Woven into the narrative is an equally intriguing online slot game that offers players so many ways to win it makes every spin an experience all its own. Players can click on various links and uncover more pieces of the story as they play. The details become even more intriguing as the game goes on. The 10-song soundtrack makes for an exciting yet chilling ambient effect while also lending an extra dimension to the story. 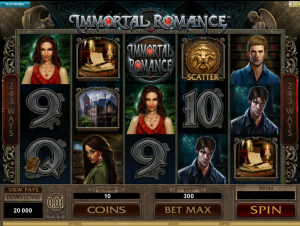 Instead of pay lines, Immortal Romance offers the player 243 distinct ways to win per round. In “ways to win” slot games, the player uncovers matching symbols on adjoining reels to create a winner. It does not matter whether the symbol appear at the top, middle, or bottom of the reel. The number of winning possibilities makes Immortal Romance far more winnable than classic pay line games.

When the player sees the Immortal Romance logo, it signals a wildcard symbol that can be substituted for any other symbol in the game. The logo icon also doubles the payout of any win resulting from its appearance.

The Wild Desire feature is activated at random and can appear at any point during game play. It has the capability of turning any reel – or all five – wild. Both the Wild Desire and Wild Symbols make it much easier to win – another advantage of playing Immortal Romance.

Scatter Symbol and Chamber of Spins

The first entry into the Chamber brings the player into Amber’s chamber, where 10 free spins are waiting with a multiplier of 5. As the game progresses, subsequent trips into the Chamber bring you into Troy’s chamber. There, the player uncovers the Vampire Bat feature and 15 free spins. The Free spin bonus increases again when the player enter’s Michael’s Chamber where 20 more spins and the Rolling Reels feature awaits.

After the 15 entries into the game’s Chamber of Spins, the player discovers Sarah’s chamber. There, 25 more spins and the Wild Vine feature are uncovered. The game keeps track of your progress so every time the player logs in, he or she is directed immediately to the last chamber achieved in previous spins.

Immortal Romance is a darkly delicious gothic fantasy online casino game. With an unbelievable 243 Ways to Win, a memorable cast of characters, engaging story line, and original soundtrack it is sure to hold the players interest and keep them coming back to learn more of the story.