Rating:
REview of Thunderstruck 2 Slot
For slot players who were a huge fan of the famous game Thunderstruck, now there is Thunderstruck 2. This video slot game is a 243-way type of game that is currently able to be played within the Microgaming platform. Of course, like most Microgaming games, this slot comes with a wild multiplier, which in this case is represented by the logo of Thunderstruck. What is a slot game without a good scatter? The scatter for this game is the bonus hammer, this hammer allows the player to complete a winning scatter combination if there are 2 or more scatters that are showing up on the reels. If a player wishes to play this fun-filled game, they can play Thunderstruck 2 using real money in all of the casinos that feature Microgaming games. 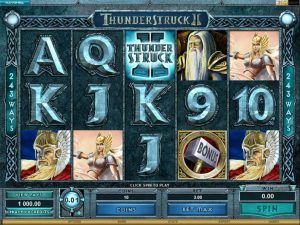 Before a player can even think about starting their adventure in the forgotten world, they must first adjust their wager they wish to make. A player can adjust their wager by clicking on the +/- button. The sphere symbol should allow players to change the coin value that is presented from being at 0.01 to 0.05. The coins button which the player can click on is able to alter the coin amount that is being bet. While players are able to hit the spin button in order to begin the game, they can also hit the bet max button in order to make to reels spin using the highest wager that is currently available. Like many of the other games with software by Microgaming, if the player wishes to spin the reels a certain amount of times in a row, all they have to do is click on expert and then select the autoplay button.If a player gets 3 or more of the hammer icons, this will activate the Great Hall of Spins game. There are 1 of 4 bonus games in which a player can play, of course the Great Hall of Spins is one of them. However, if a player wishes to play the other 3 games, they must activate the Great Hall of Spins game a certain amount of times. Everyone of these games will award the player with free spins and another feature. The other three games are the Valkyrie Game, the Loki Game, The Odin Game and the Thor Game.

The Loki Game can be activated by a player who activates the Great Hall of Spins Game 5 different times, this also will award the player with 15 spins that are free. If a player sees a wild magic symbol come up on reel 3, it can equal out to up to 14 of the regular symbols being turned into wild symbols. The spins that are free for this one can also be re-triggered.

The Odin Game is able to be unlocked at the time of the Great Hall of Spins having been activated 10 different times, and this will award the player with 20 spins that are free. If a player has any win, it will automatically activate the Wild Raven Feature, this is where there are random symbols that are turned into wild multipliers. If a payout has a wild card, then that means that the player can be given up to x6 multiplier value. However, this is not a feature which a player can re-activate at the time of a spin that is free.

Players are able to unlock the Thor Game at the time which the Great Hall of Spins Game has been activated a total of 15 times, and this will give the player 25 spins that are free. If a player makes a win at all, it will activate the Rolling Reels feature, and this is the time that the symbols will explode and then disappear after the time that the player has paid out. Players will probably notice the symbols that are above the exploding icons will shift in order to fill the spaces that are empty, allowing the payout a x2 multiplier. This is a game that is not able to be re-triggered during the free spins.