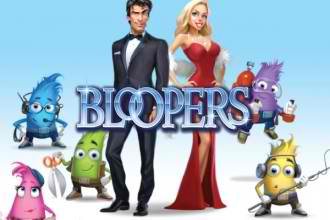 Rating:
Bloopers Slot is a video slot that is powered by Elk Studios and was launched in March of 2016. Bloopers is in the top position because it has a 96.1% RTP rate. It is based on bloopers that are generally edited out of Hollywood movies and television shows. They have life like stars and a cartoon backstage crew. The format of the game is common. They have 5 reels, 3 rows and 243 play lines. Reels are the different sections that are set to motion when the game has been started and play lines are the list of payouts that can be rewarded based on winnings. They must have 100 coins. Players have a choice of using 12 different bet options. They can also select different strategies for the game and have wagers set for their wins and losses. 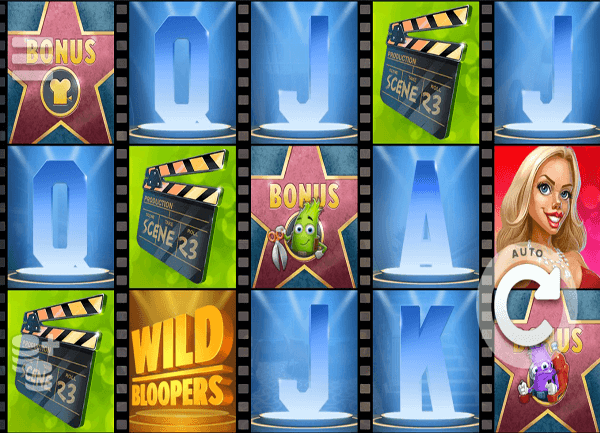 The game also includes a promotion in place with McGreen. It allows players to get free spins, earn free money and possibly an Oculus Rift VR headset. The spins are set up to let players try Bloopers Slot without spending their money. They can get more spins after a deposit of £20 or more is made to the players account. 50 spins will then be credited to the account by 1 p.m. after the deposit is accepted. Another way a player can earn free spins is by landing on the bonus stars on the 1st, 2nd and 3rd reel. If a player decides to take part in this promotion, they will be given £250 for the game after winning their first prize. In addition, UK players that sign up with this promotion will receive 20 exclusive spins and all benefits of the game.
There are a few symbols involved in Bloopers Slot. The highest paid symbols are two superstars that pay up to 600 coins for a 5-of-a-kind combo. As previously stated, they also have a bonus star. If the player gets this star, they will receive a 3x spin reward for the game. The male superstar has the highest paid amount. The reward games will include Sticky Wild symbols, that may appear on a 2nd, 3rd or 4th reel. The game ends when the symbols cover all 3 of the middle reels. Each player will be given benefits on each blooper in the form of symbols, shuffles, falling symbols, expanding wilds or extra spins. In the case of a reward game, some of those may change by being linked with the games lowest paying card symbols. Those include J,K, and Q. The rest of the benefits will be added in randomly.
Bloopers has a jackpot of £185,000. A player can use 4 different types of presets to adjust their bets. The optimizer, leveller, booster and jumper. The Optimizer option offers for automatic bets to be played based off of a player’s balance. The Leveler will raise their bet after 5 losses occur in succession. Their Booster option will raise a bet 1 level after each loss and Jumper will raise up the players bet at 1 level after each individual winning round. They are used to help ensure each player has a higher bet amount if the player feels like they may be coming close to winning the jackpot. The minimum stake for each spin is €0.05 and ranges to €100 as the maximum stake.
Bloopers Slot is an entertaining slot game that provides their players with backstage looks into Hollywood’s movies, television shows and actors. They offer a wide variety of benefits and incentives that can be earned and viewed from the game home screen. The stacked coins icon is used to regulate a players bet and their betting strategies. The providers of the game have also given their players the ability to see their Pay Table. It is located under the tab with 3 horizontal lines and allow players to see the different pay lines that are available for them to use. It is accessible any time the players may need it. The spin tab sets the reels in motion and starts the round for game play. Any player looking for unique and fun game play should try their hand with Bloopers for their next chance to win!